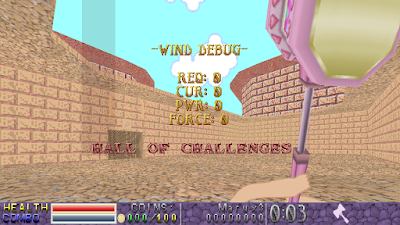 Okay, let's end the story-like writing here! The Hall of Challenges wasn't as good as I was expecting it to turn out during development, but it was a good idea. It allowed me to reuse levels I spent weeks working on with minor script adjustments. The thing is, being able to be sent off to a random location after each level didn't make much sense (even though a similar thing is allowed in later versions, warping to the Small Hut).

Since it was removed so fast, only one challenge was created, though other types were functional if forced on. As shown in the second picture above, it was a unique challenge; Mary had to survive for a certain amount of time (which varied depending on difficulty) while really fast versions of the yellow HCPD officer chased you around. In v1.6, the newly-added wind was enabled at power level 3 in 1-1 and Mary couldn't Air Dash while crying, so controlling your movement to escape the cops was nearly impossible! If you died, the dispatcher insulted you then you returned to the Hall of Challenges; Failing any challenge would just return you there.
If you completed one, you would earn up to five Powerup Coins depending on your difficulty and the challenge type. If you already completed this challenge, you would only get half. After this, you would advance to the next level. Although nowadays these coins are easy to come by, able to be purchased from the Small Hut and found within the levels, back in v1.6 they were your reward for completing challenges. In fact, even in v1.9 they are sometimes referred to as "challenge" internally even though this version of the challenges is no longer used.

But wait, what do I mean by "this version"? Well, reader, the challenges are planned to return in either v1.95 or v2, the ZDoom Demo. If you've looked closely inside the Small Hut, you may have seen an orange rug with a "C" on it. This will toggle challenges, which will make the challenge description and completion status appear when changing levels using the two switches beside the teleporter.

This is how it was planned ever since the Hall of Challenges was removed, but only now am I adding the changes to make challenges work! The rug doesn't function yet as that's the part the player will interact with. You'll step onto that rug to toggle challenges. Using the level change switches, you'll see whether this challenge has been completed before and what the goal is. After this, using the teleporter will warp you to the level you've selected, only with a challenge enabled (indicated with a timer on-screen). Said timer is separate from the timer that appears during speedruns, so you can still do challenges during them.
Completing a challenge will reward you with normal coins, as Powerup Coins are hidden in the levels now. You get a set amount of coins depending on the challenge type but bonus coins are rewarded based on an additional condition that is determined by what challenge type was completed. For example, "run to the end of the level" gives you coins based on how much time you had left on the clock while "kill monsters" gives coins based on how big your combo was upon completing it. (Don't think of using a Combo Coin to cheese that, mind you.)

Anyways, whoa, this is a big blog post! Look forward to when challenges return to Mary's Magical Adventure, player! They will be back in v1.95 or v2, whichever is the next release.
Written at 11:20 AM