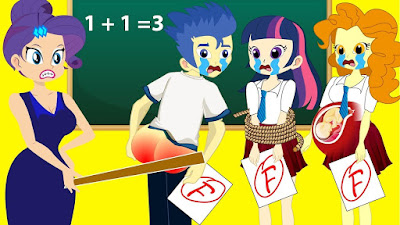 Let's return to the My Little Pony ElsaGate series that spans many channels! Why did I wait so long to do this? Well, let's just say that once you see one of these series, you've pretty much seen all of them; Just swap out the cute Twilight Sparkle design for a girl from a different series and you have another series. Every ElsaGate series is made up of characters from the franchise they're ripping off put into certain roles; There's always:
I've seen Elsa/Spiderman, the Minions, and Mickey Mouse/Minnie Mouse get thrown into these animated series as well, and indeed they do similar things, even creating new characters if they can't find one that fits a role. For example, in the Mickey Mouse ElsaGate series, they made a female mouse that wears green clothing. She behaves similarly to Adagio in the Equestria Girls ElsaGate series, but she never existed as a official Mickey Mouse character.

Anyways, with that explanation out of the way, let's look at a random video from Pony Non (Snoogie96)'s channel! It has the same characters we have come to know and (maybe) love.

This scene starts in the classroom and the teacher (that infamously abuses the teenagers in the classroom if they do anything bad) walks in wearing a blue dress that doesn't quite look like something you'd expect a teacher to wear when teaching. She writes some insanely easy math (seems to be a common thing even in the videos themselves) and Applejack gives the answer to 1+1. (Good thing she isn't Flash Sentry or we know what curse word he'd throw up there as the answer...)

Adagio and Twilight Sparkle give correct answers too, so they all get "A" grades. Next, however, the boys are told to come up and answer math problems. Yes, that includes Flash Sentry, the one we all know can't resist cursing on the chalkboard. The other two are some unknown boy wit yellow-green hair and the Jimmy Neutron expy that was seen in another video I looked at (though no picture of him was shown). 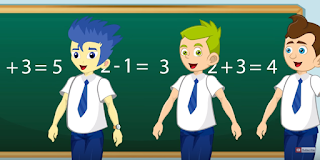 aaThankfully, Flash doesn't write the word we were all probably expecting, but he answers that 1+3 equals 5, which is incorrect. The other two don't do any better, so the abuse-happy teacher gets angry. Thankfully, she doesn't beat them with the ruler. Instead, she commands the girls to do it. They seem to enjoy beating boys. (Also, frustratingly, is that very stupid double standard in effect in ElsaGate? The girl always can beat the boy but the boy can't even have self defense when the girl rushes into their room and throws them...I hate that.)
Seriously, why is Twilight Sparkle smiling about beating up Flash Sentry? She doesn't seem angry (unlike the teacher in the background) and happily does this for a few seconds as the scene ends. Interestingly, all three do the exact same animation in sync with eachother. They have to be using that program CrazyTalk Animator which allows easily swapping characters and making them all do the same thing, not that it'll matter since I won't be able to pose Twilight Sparkle myself. I'm still getting a plush doll of this design as it's the only good thing from this messed-up series. 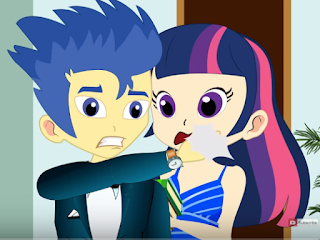 These videos are just a "scrambled" series of animations that add up to over 10 minutes; People say this is so they can get ad revenue or something. Still interesting how many times they reuse scenes in these videos. Interestingly, the scene they chose to reuse after that one is one where Flash actually hurts Twilight Sparkle, but for no reason! He could've defended himself during the infamous scene shown in #2, but instead he punches her, if only for the reason that she bumped into him while carrying books. Flash, you should've beat her up that other time, not now! 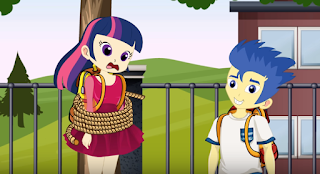 jIn the scene after that short one, Flash thinks back to a 15-minute math test where he (somehow) gets the wrong answer to 1+1 and gets beat by the teacher as a punishment. As revenge to Twilight Sparkle who I assume was the one to give him the wrong answer on purpose (as she's seen laughing after that), Flash throws a rope at her feet, drags her across the sidewalk, then ties her to a tree. That's the first thing wrong here. The second thing? Those backpacks! See how out-of-place they look? They have thick, black outlines unlike the characters' outfits and base body parts. 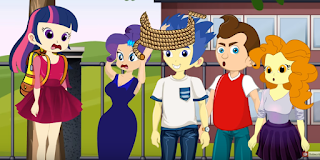 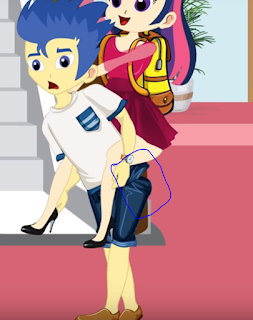 I feel if I keep explaining every part of each scene, this'll be over one thousand words, so I'll just point out the highlights of what comes up after that scene. First off, here Twilight Sparkle gets a ride on Flash Sentry up multiple flights of stairs. Flash's walking animation during this shows how his body is made up, like bone animation. Not just any bone animation, though; It looks like CrazyTalk Animator's style if I know what it even looks like. Okay, ElsaGate has a way of frustrating with its stupid logic and other things so I'm just going to really speed through the rest of the video. 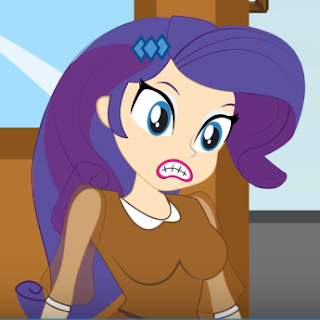 Is it just me or does this look like Rarity? She has the wrong idea of "white" skin tone if so, because Rarity's white is pure white. It turns out this is the teacher, though; Something looks different about her hair here. 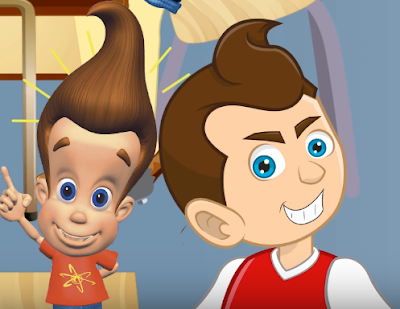 Seriously, this boy looks like Jimmy Neutron; Just look at that hairstyle, that eye color (which normally is only blue if the character has blonde hair, suspiciously averted...like a certain boy genius), the nose shape, and even the shirt color (not the shirt itself). 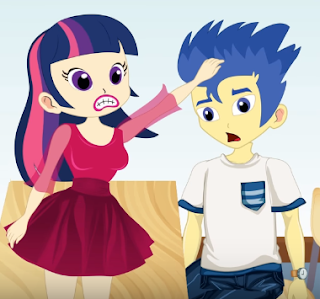 As I've said before, Twilight Sparkle snaps at anything, no matter how small. She doesn't even ask questions and Flash doesn't do anything to prevent her from kicking his butt. In this scene, Jimmy Neutron (what I'm calling him from now on) sticks his foot out and makes Twilight Sparkle trip. She doesn't know who caused it but the instant she stands up, she makes that angry face and walks right over to Flash, no "did you do that" or anything logical... To give her credit, she hurts him by smacking his head into Jimmy Neutron, so maybe she somewhat knows who caused it but uses Flash as a punching bag? Okay, that isn't any more fair towards men, Twilight Sparkle. 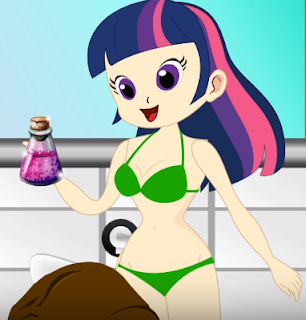 Two scenes later, we see Twilight Sparkle in the shower wearing the least amount of clothes possible. She also holds what looks like a potion (with a clashing art style, typical of ElsaGate). It reminds me of one scene I saw where Adagio made Twilight Sparkle eat an apple which knocked her out and Flash had to bury her. Yes, this appeared in one of these videos. The outfit she wears reminds me of one thumbnail someone showed in the /r/ElsaGate subreddit which showed Flash peeking into a bathroom where Twilight Sparkle was leaning over striking a pose wearing a red version of what she's wearing.

Thankfully, it doesn't make Flash stare at her in an inappropriate moment; Rather, she gains a fancy, old-timey dress. She then picks up her iPhone and calls Flash. Yep, all characters in this messed-up universe use the inferior OS called iOS! 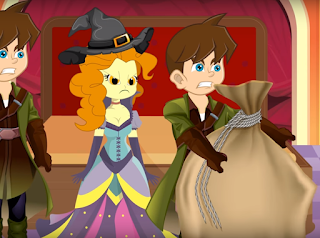 She is captured by that guy with the yellow-green hair seen in a previous scene, who then takes her to a castle or something where Adagio, looking similar to that dark scene I brought up before, has two twins capture her in a bag. What's notable about this bag is it appears to be 3D! What program takes 3D models and distorts them? Well, Anime Studio Pro can't do that. It can distort 3D models but not in 3D with animation...ah, but CrazyTalk Animator can take iClone models and animate 'em (or something), suspicious! Well, that's one possible sign they use CrazyTalk Animator! To see the 3D-looking bag, go here. Do beware this will be added to your watch history on YouTube, which will influence YouTube's recommendations, so remember to remove it from your watch history after seeing this video.

To finis this off, the video ends with Twilight Sparkle being locked in a room, but a bird from an earlier scene I didn't tell you about alerts Flash, who then turns into a prince-like outfit and comes into the room. Adagio is tied up and...y'know what Twilight Sparkle does best, violence! For once it isn't a boy that doesn't deserve it; It's a girl that does! At least this video ends on a happier note than it started with the abusive teacher...speaking of that teacher, guess what Pony Non's profile picture is? 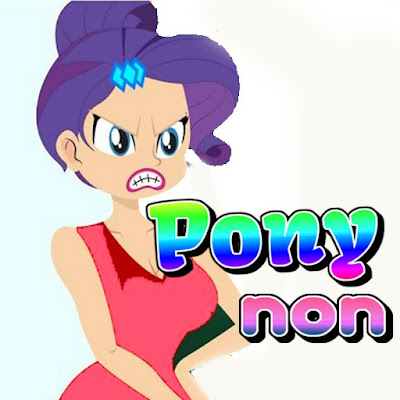 Oh no, it's her! I'd better go before she beats me with a ruler despite me not getting anything wrong!
Written at 12:41 PM