Magical Mary 1 has been in development for years, possibly dating back to 2010-2014, when it was just called "World of Kirbycraft", after the movie series I was making. As with any game, things weren't always as they are today, so it'll be fun to look back at each version and see how the game improved with time, and today we're starting with the earliest build I've found, one dating back to 2015, which was only seen in my third development video on YouTube! Let's dive into it, after the cut!

Since this is the start of a blog post series, let's establish the general layout. First, I'll talk about gameplay and the player's overall experience, then follow up with info about unused content and interesting miscellaneous stuff. As this is the first post, everything is new, so it'll be giant. Later versions will naturally have smaller posts written for them if they reuse things from a previous version.

With that said, let's start with the first thing the player sees upon starting the game, which at this point was just GZDoom with Freedoom as an IWAD, the title screen:
...wow. This title screen doesn't give the best initial impression, with a messy, incorrect-looking Freedoom title screen and an overall Doom-esque menu. That skull used for the selection cursor isn't helping, either! Anyways, on this menu, the iffy logo used for the World of Kirbycraft series is visible, so let's take a look at that...
Yes, I bet you're face palming right now; The logo is just World of Warcraft's logo with Kirby's logo slapped over it. It gets worse the more you look at it, as a weird rectangle is around the Kirby logo, and even that fails to cover up the word. Back then, I used CoreFX rather than Adobe Photoshop, which didn't have a healing tool I could use to get rid of the text cleaner.

This very logo also appears in the movies, but only during its very brief, strange-looking intro. However, the logo is constantly changing position/size, so it's hard to get a close look at it. Anyways, let's select a difficulty and start the game.
Like Doom, difficulty levels can display messages, usually used to warn the player about how unfair a difficulty is. Here, hard difficulty shows the message above. Insane difficulty says this:


This is the highest skill level. Not recommended unless you're experienced.

It doesn't matter what difficulty is chosen in this very early build, as there are no monsters in the one area you can visit, a place I've come to refer to as "Stupid Hills", a level I scrapped for being just...too boring!

In this version, it's very incomplete, with only the first area and cutoff paths off to the sides. The only thing here that makes this build interesting (and recognizable) is the random grey beam with animated pink light inside it, which is a Sonic Boom: Rise of Lyric reference. This was a character-specific gimmick, which only allowed Mary to stand on it. If Arthas would land on it, he'd get forcibly thrown to the side.

I voice acted unique lines that played any time Mary would land on the beam. Though some are just random noises, two include some of Mary's longest voice lines as of then. One of them mentions school, which hasn't appeared in the game at all! I'll include all samples of Mary talking in this version at the end of this post, but here's transcriptions of the more important lines:

There's one more thing that makes this build unique from later ones I publicly released: Mary uses restaurant cups as weapons! When Mary drinks the liquid from them, she temporarily powers up and performs attacks based on the color of the stripes on the straw. If the player uses the weapon enough, Mary will revert to holding the cup and will talk about losing her powers.

Now, this might sound cool and unique, but overall it wasn't that exciting to fight enemies like this. Mary had to stop and drink from the cup multiple times a minute, plus the attacks pretty much ironically only hurt yourself unless the projectiles don't touch the monsters directly! Here, look at this video and judge for yourself if combat looked fun in this very early build:
With how tedious the combat in that video was to record, I have to question how back in 2015 (or possibly earlier) I thought anyone would enjoy that combat. The attacks behaved uniquely, but sometimes it isn't best to reinvent the wheel; Projectiles exploding when hitting enemies is nothing special, but it is more of what the player expects than fireballs sticking to enemies, waiting until they hit the ground to bounce into the air...

This is common to all of the versions of Magical Mary 1 that have the "World of Kirbycraft" name, but I'll say right now that the gameplay doesn't feel as polished as it does now. Mary's Air Dash practically requires mashing the jump button, and it can arbitrarily not work in some situations. As for Arthas... His Kirby Puffs are also inconsistent but on top of that common problem also requires you to wait between jumps (a'la Kirby Air Ride) and doesn't give you any control once you're in the air. I fixed both of those when Xane replaced Arthas, but...just look at how iffy Arthas moves here:

Well, now it's time to go beyond what I intended the player to experience in this version. No, I didn't look over anything above or I would've written about it. If you followed the water down either generic corridor, you'd be greeted with a wall in your face. With any in-development level I make, this is a common sight, but usually levels I make don't cut off less than a minute after they load!
Despite this level's stupidly small size, there is an area out of bounds meant only for Arthas's intro cutscene, Uther's Lab. If you turn around when starting the level, you'll see the lab in the distance in a field, but trying to fly out there will kill you! To make matters worse, that building out there is just a really flat imposter, not the real interior.

To go inside the lab, bring down your console using ~ (tilde) and type noclip2. Fly up a bit so you don't touch the insta-kill ground, then move towards the fake building. As you enter the open field, turn right and go through the glitchy black wall. Welcome to Uther's Lab. 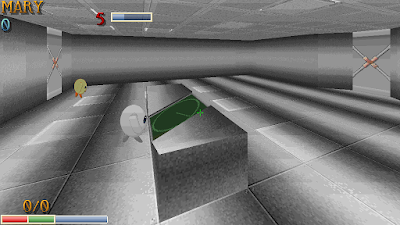 Yes, this is the really basic room where the first part of Arthas's intro would take place. Though it looks grey and empty here, it became more detailed with blue lighting in later versions...though still wasn't ever used! In fact, it's normally worse than this, because the Arthas and Uther cutscene objects aren't normally here. (They only move around and talk, so I can't recreate the cutscene, or I probably would.) I'll explain Arthas' intro here, since it was never made:

Arthas and Uther are in Uther's Lab, standing around. Uther recommends Arthas goes out the back door (left side in screenshot above). Arthas initially refuses, but Uther forces him out. Arthas trains outside (which is just a glorified tutorial), then walks back in to check on Uther, not approving of the tutorial he had to go through. Uther sees an odd blip on the radar, pointing straight ahead. Arthas, knowing what he has to do, starts running out the front door. He runs down the path then jumps down to the starting point. No, I don't remember what enemy Arthas was off to fight, but I know it wasn't the Origin Master. I don't know how far I went with it, but Xane might've been planned to help Arthas, though over time, only Uther was heard talking to Arthas during gameplay.

Now, Uther's Lab was within the level, but there are two levels the player never visits within MAPS.wad, named TEST and SND_TEST.
At first glance, TEST is just strange. The initial area is a narrow corridor with grass textures on the walls that has no gravity. Going through the wall to the left, you will end up in an area with a giant fruit punch "juice box" from Sims 3 Seasons. This area also contains character-specific areas and a broken end-of-level area that takes you to the normal level, since this area was used to test those mechanics before later making their ACS scripts global. 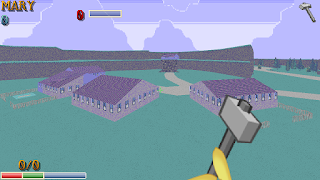 The more interesting part is on the other side. It's a big, open grassy area with paths and houses. It's better than the normal level in this build! What's going on? Well, this area was made to be used as the background of a Touhou-esque shooter section. Yes, I'm not joking, this was to be used as the background behind a boss battle where you'd fight Reimu, but due to technical problems (and now obvious legal issues that would arise), the whole idea was scrapped. 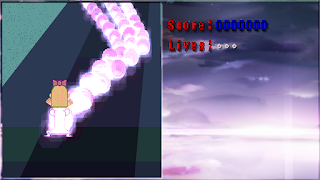 Y'know the weird first room the player starts in? Well, bring down the console and type in puke 102 to enable "Touhou mode", as the script calls it. When in this mode, you teleport to that room, and get locked into an area visible on the left side of the screen. The controls are the same as normal, except for your "run" button, which instead puts you in focus mode and reveals your hitbox, just as it would in the Touhou series. 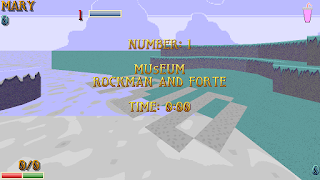 SND_TEST is a more logical level...or rather, would be if any of its music played! I assume this map was created before the three soundtracks that are already present in v.0.75. Well, this gives a good idea of the random songs World of Kirbycraft would've used in my original vision, minus Famous by Puddle of Mudd, which would've played during the final boss, and probably would still be, if the legal system was wiped from existence...

It seems I originally intended for the game to use music from various sources, mostly Mega Man games. Here's the song list in the sound test, each linked to YouTube so they can actually be heard, unlike in the game proper:
Based on that list, I can only guess I threw in every song I liked at the time, like the overused "Lucky Star Mush" song that I played in the background of some of my older YouTube videos. The SNES songs had static in place of their cymbals, which rarely made any of the songs sound better. This can be heard in one of my development videos, where I make fun of the noises.

Well, this is giant as-is, so I'm going to split this post in two. Hopefully later versions I look at don't have so much stuff to talk about!