Welcome to the second post in the My Little ElsaGate series! I'll keep looking at these strange My Little Pony videos so you don't have to, though if you want to look at them yourself, they're all named "My Little Pony MLP Equestria Girls Transforms with Animation Scramble".

It's best to search for that term instead of visiting a single channel as for some reason it seems multiple channels upload different episodes in this series. I'm not sure why this is done, whether it's a single person or multiple people uploading content to the many channels this series appears on, or if it's done just in case YouTube shuts down one of the channels.

I assume it's the latter, as it isn't unheard of to see weird channels like this have backup YouTube channels which they switch to when their main channel goes down to "ban evade" as it's called. Anyways, let's start this post off with a big one!
In this video, Flash leaves a love letter and rose at Twilight Sparkle's door. He leaves and Twilight Sparkle, confused about the envelope, carries it and the rose into her place and reads it after looking at the picture of Flash that was also inside the envelope. You may not notice it, but it's a fully-English love letter with a few grammar errors! Let's read it together! 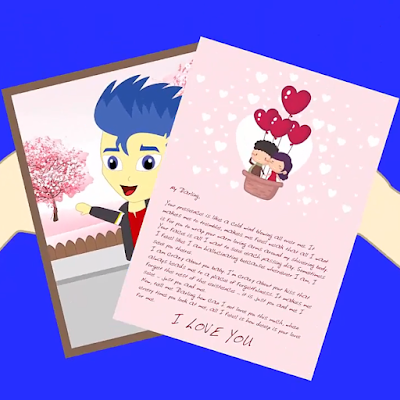 Your presence is like a cold wind blowing all over me. It
makes me to tremble, makes me feel weak that all I want
is for you to wrap your warm loving arms around my shivering body.
Your face is all I want to see each passing day. Sometimes
I feel like I am hallucinating because wherever I am, I
see you there.
I am crazy about you baby. I'm crazy about your kiss that
always leads me to a place of forgetfulness. It makes me
forget the rest of that existence ... it is just you and me I
see ... just you and me.
Now, tell me Darling how can I not love you this much when
every time you look at me, all I feel is how deep is your love
for me.

You don't even get time to read that as within two seconds it moves on to the next scene! I'll just say the cursive font they used is a bit strange with how its 'e' is written. It appears this letter's contents comes from this book and this website, though other Google search results mention this love letter being used in scams, which is fitting when you think of how these videos are like scams for kids who don't know what's the official cartoon and what's bootleg like this! The text is seemingly written out of order and with confusing changes like the spaces around the ellipses, which isn't normal in English.

A strange thing I didn't bring up last post as it doesn't involve any potentially bad behavior for children is a minor thing only I'd notice. Please click or tap the picture above to see it up close and tell me what looks wrong. No, it isn't the text on the tickets, though that'll be mentioned soon. It isn't that I'm viewing the video in low quality, either, as I make sure I'm viewing it at its highest HD quality before capturing each screenshot.

Basically, this series looks like it's vector, or graphics based on points and smooth lines drawn between those points, like what online Flash games or SVG images look like, always clear no matter how closely you zoom in on it, unless it's using images as part of it, which only become more pixelated or make their JPEG compression more obvious.

However, sometimes the camera zooms in very closely on something, like the cinema tickets here or Twilight Sparkle's face when she's putting makeup on. During these moments, you see the person that drew the graphics for this series either makes them vector but then pre-renders them into images or they draw them manually then rotate them in whatever animation program they used, which also explains the semi-robotic movement the characters have. 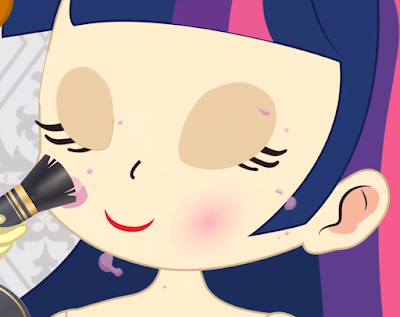 Just for completion, here's that picture of Twilight Sparkle having blush applied to her cheeks. If you look closely, you'll see the odd image-based way that the artist used when animating this series. What's also odd is the outline by Twilight's eye on the left side of this picture, which has a outline in its inner corner, even though the eye on the other side doesn't have this oddity!

I suspect they overlay the eyes with the eyelids on a separate layer, but didn't align it perfectly with that eye unlike the other eye, causing a small bit of her eye to show around the inner corner of that eye. If her eyelids moved smoothly, I'd understand why this was done, but her eyes, eyelids included, just fade or cut, no smooth animation, making this pointless. I'll just say I don't animate Mary this way and wouldn't even if I attempted to make this cutie. 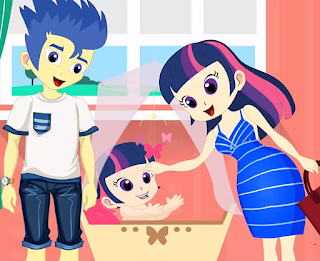 Anyways, back to those two tickets. One thing you may have noticed if you looked at it closely was that they are "adult cinema tickets". For some reason, the characters seem like teenagers, which is that age confusion that I brought up in the first post, but yet they are actually adults, not married nor having children. You could argue that this takes place before the scene where they're married with their own children, but there's yet another problem with this series I haven't mentioned yet!
I've seen enough episodes to catch on that each episode/10-minute video contains multiple scenes, sometimes with a fade to black in-between them, other times forgetting to add it. Additionally, I've seen the same scenes appear  two to three times, like the scene where Flash steals a lollipop and gets into a fight with the child's father and the one where Twilight Sparkle blows the poop bubble gum up then pops and sticks to her face.

Sometimes they were at the beginning of the episode, other times at the end, but this told me that each "episode" is basically a randomly-generated series of pre-made scenes, thrown together so kids don't know how they're put together. This also explains the misleading thumbnails that have content that never happens in any of the scenes, such as this odd gem:
This thumbnail is what encouraged me to look at the series past the single video where Twilight Sparkle was wearing a pink dress. Unfortunately, this very child-unfriendly scene never appears in said video! I wonder how cool it would've looked in motion, with Flash getting frustrated at ratios, cussing on the chalkboard, then Twilight Sparkle getting very angry and throwing an eraser straight at his face for doing that!

I know, I'm getting distracted here but this leads to another thing that's weird about this series! The characters in school are clearly teenagers (or adults due to this series making no sense) but yet they don't know basic math! Y'know, that 1 + 1 = 2 and 1 + 2 = 3? I know they probably are targeting children who may not know these simple problems (despite the big cuss word in that thumbnail above), but a lot of thumbnails show strange answers for the simplest of math problems!
I would question how teenagers or adults don't know these simple math problems, but then I might as well also ask how Dora Marquez never learns to look behind her before asking random children where her next location is! Anyways, to finish this up, let's return to the love letter scene with the two pixelated tickets since we now know that the order of uploaded videos to the multiple channels can't be trusted! I know this shold've been done from the beginning of this "scene", but I didn't plan this until now! 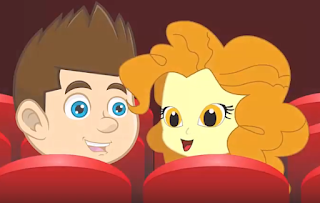 After Flash gets the two tickets, he leaves them at Twilight Sparkle's door, but she doesn't get them before Adagio swaps them with a luxury hotel thing and uses the tickets to get her and her love to the movies instead of what Flash originally planned, him and Twilight Sparkle.

Twilight Sparkle returns home to find the $100 luxury hotel card that Adagio swapped the tickets with. You can probably guess what happens when she finds Flash...
Yep, it's time for violence! This time, I decided to make a GIF just to show how far Twilight Sparkle takes things when she's angry. In this case, she jumps and kicks Flash in the face, then grabs him by the legs and flips him to the ground. Wow, I think I'm spoiled by children's shows that avoid violence when possible, so seeing this is a bit weird. Twilight Sparkle, I think you have anger management issues or something!

Why has no one called the cops on you yet? I'd probably consider it if you came in and started hurting me even though it wasn't my fault! A cop was shown in the scene where Flash was thrown in jail, so cops exist in the universe where this series takes place. I may not like how mean Twilight Sparkle can be in this bootleg series, but I'll admit this is her best attacks she's done. After that, Adagio comes in to explain that she was the one that swapped the tickets out, stopping the attacking before more could occur. I guess Adagio isn't as bad as I thought! 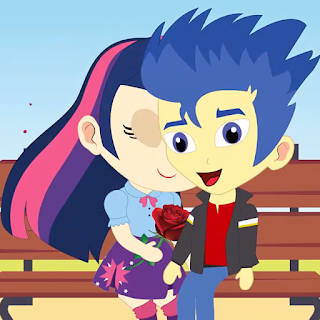 After this, Flash (somehow not angry at her for attacking him) brings a rose to her and seemingly proposes. Twilight Sparkle takes the rose but before they kiss, a heart-shaped cloud appears to cover it up. This would seem like a good time to end this scene, but this is where something weird happens...
All of a sudden, two zombies draw near, one coming with a knife, seemingly what you'd expect to get their "BRAAAIIINNNS" or whatever they say, but the other one's syringe is strange unless you read the first post. In said post, I mention ElsaGate videos sometimes have syringes and injections. From what I've heard, these are for injecting drugs into children, one of the dark things that ElsaGate videos prepare children for. I may say this series is safer than the average ElsaGate series, but occasionally things like this happen, though usually it's limited to the thumbnails, like sexual pictures of Twilight Sparkle (with light purple skin tone, as her official design has, strangely).
In this case, they're after their iPhones and purses/other carrying cases. Zombies are after strange things in this world. Flash gives out an iPhone and wallet (or whatever the brown thing is), but they don't leave them alone yet. Twilight Sparkle's easily-triggered anger re-appears, for once not towards someone who doesn't deserve it like Flash.
One zombie is assumed to be killed by Twilight, who then takes their knife and threatens the other zombie with it. The zombie leaves, but it's revealed three boys have been watching them, laughing at them. The one wearing a blue shirt yells, hurting the other two boys' ears and making them fall over.

The last part of the video shows Flash playing a song for Twilight Sparkle, who's in a bathroom with a small pink container full of water. She laughs but then...the video ends abruptly, no indication of if she'll pull any pranks on Flash or what she'll do with the water. Maybe if the scene is re-used in another video, I could find out what Twilight Sparkle does with the water. Well, until next time, avoid ElsaGate videos!
Written at 2:30 PM