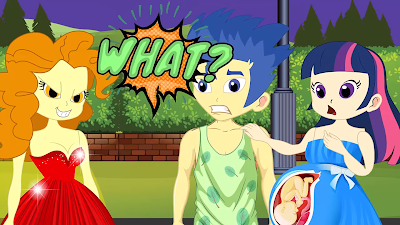 You may have seen an ElsaGate video. These videos seem harmless at first and for parents, they give something for their children to watch. It just looks like their favorite characters are going to be doing (weird) things with a giant library of similar-looking videos with a couple things swapped out each video, but under the surface, bad things await children!
For example, characters having needles with drugs in them inserted into their butts, violence, or potentially hinting on sexual things. Additionally, it's been theorized that the strange gibberish in the comments is a language for people doing bad things with children in real life. If you want to read more about ElsaGate, I recommend Investigating YouTube's website and YouTube channel.

So, what does this have to do with this first post? Well, I've been reading about ElsaGate on /r/elsagate and noticed a strange version of Twilight Sparkle from My Little Pony's Equestria Girls spin-off. She looked off from the normal Twilight Sparkle, with normal white skin instead of light purple and she had different eyes. Although I didn't want to like this design due to it being from an ElsaGate video series, I couldn't help but find the bootleg design cute.

I began to watch the videos, and as I did, I noticed some odd common behavior and Twilight Sparkle's various outfits. I realized if I wanted a custom plush doll of this girl as she won't have official merchandise for obvious reasons, I should find a good outfit.

ElsaGate videos try to sneak implied sexual content into videos, so I feared there'd be various "sexy" dresses and bathing suits before I would find a dress I liked, but I was proven wrong when I found a video showing her wearing a blue dress. Nothing too sexy but not too plain, perfect.

Before I talk about the problems with this series, let's introduce the main characters of this series!

Twilight Sparkle is a human girl that looks like a certain alicorn but has normal, white skin and a younger-looking face. She wears many outfits, the most recognizable being the one from Equestria Girls, shown above. She is normally nice, but if anyone tries to mess with her through pranks or other things, she will find a way to get revenge, using physical combat if necessary. 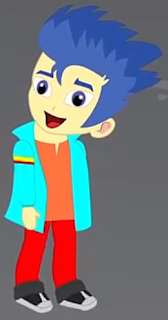 A boy who loves Twilight Sparkle, in some scenes seemingly married to her. He likes to do things that usually get him in trouble, such as pulling pranks on Twilight Sparkle or stealing from people. He never gets away with any of it, and even if he's hurt or thrown in jail, he's fine by the next scene. 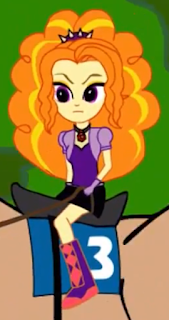 Adagio is another girl from Equestria Girls that usually messes with Twilight Sparkle and Flash when she's around them. The worst she's done yet is pull off Twilight Sparkle's skirt in front of her class. She has helped Twilight Sparkle get ready for her wedding by applying blush to her face and has shown she can ride a dinosaur in a race.

A recolored, pink-haired troll from the Trolls series. One time, her hair was colored cyan. She rarely pulls pranks and has been shown to own a pizza place which was the target of Flash's thievery once.

Now to explain those strange behaviors. Basically, one thing to point out about these videos is that they aren't afraid to show violence. What usually happens many times per ten-minute video is one character will pull a prank or knock someone over, usually Twilight Sparkle. This will anger the other person, who usually attacks by throwing something at them, punching them in the face, or kicking them in-between the legs if it's a guy.
Another odd thing that occurs in many scenes, though not as common as violence, is seemingly whoever created this bootleg series' obsession with poop. So far, I've seen three cases of poop being involved, all cases involving Twilight Sparkle and Flash:
Both of these are strange, but this next thing I'll explain will confuse you. You my not realize it, but the Twilight and Flash you see in the pictures above are of different ages. Sometimes they look like toddlers, but other times they're children, teenagers or adults, implied to be married to eachother in the last case, sometimes with the toddler or child versions visible, implying they somehow had children that look very similar to their own appearance. I'd keep going on this, but I'll keep each post small to make it easier to remember which I've talked about certain things within.

So, what are the problems with the three things talked about today? First, violence being a very common reaction in this bootleg series. That's a problem as it may teach children that if anyone doesn't do what they like, they can feel free to punch them, kick them in-between the legs, or throw whatever they're holding at them. Children's shows never tell kids that as it isn't the right thing to do.

Secondly, poop references are here. They aren't as bad as violence appearing everywhere, but this could make kids think that poop can be a funny thing to play with or that throwing poop at people would do anything good. I would make a paragraph on the differently-aged versions of each main character, but it's obvious how hard it is to tell teenage and adult Twilight Sparkle apart.
Written at 12:00 PM