Welcome back! Last time, we looked at the intended but very flawed gameplay that I thought was fine back when I developed this version, plus the "test levels" in the game. This time, we're going to look at list of monsters that are in this version. Yes, I said there were none in normal gameplay, but oh, there's a small list fully programmed into the game at this point in development.

Though not a single monster appears in this version, there are some programmed in /Decorate/kmonsters.txt, Some are from the Kirby series for obvious reasons, but others aren't. Here's the full list, in order of when they appear in the text file, from top to bottom:

Just like in the Kirby games, this innocent creature happily shows its true "dog" form when you hit it once. The only way to avoid seeing the "dog" is by dealing a lot of damage at the same time. This isn't considered a monster to the game until it transforms, so if you can resist the urge to shut it up, you have one less to worry about. 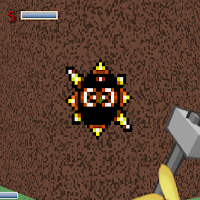 Another common Kirby enemy, a spikeball with eyes. If you get near it, it will start flashing. Touch it, and it will yell "Mouse!" at you and send you flying away! This enemy is indestructible, so your best bet is to avoid it. 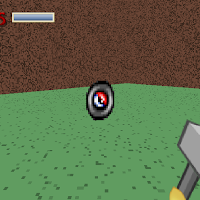 A wheel with an eye at its center that somehow maintains orientation while it rolls around. Wheelie is a dangerous and unpredictable enemy, slowly moving until it gets into the perfect position to run over you! Its speed (and really bad weapons in this version) make it pretty dangerous, taking three hits from Arthas's hammer to make this wheel's rubber explode! 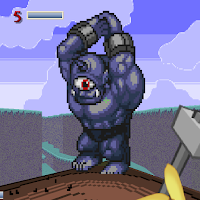 This big, blue cyclops may look intimidating, but he's only a threat up-close, conveniently the only distance your weapons work at! When approached, the troll raises his arms then slams the ground below him, which causes damage to everything in the area. Compared to his appearance in Mary's Magical Adventure, he isn't as powerful here, plus doesn't have random arm-brace colors. 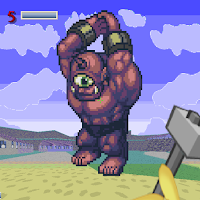 This larger, red-colored variant of the Troll may look like he should be able to hurt you from longer distances, but in reality, he's nearly the same as his normal-sized counterpart, only 3¼× bigger! Unless you cheat or team up with a friendly monster, you will be here all day with this big pain. 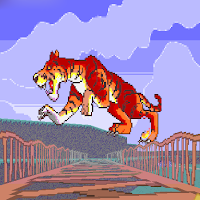 This aggressive animal is more complex than any other enemy in this version. Once it sees you, it changes its behavior based on your distance. Get up close and it'll prefer to try pouncing on you, but run away and it'll really speed up to catch you! Your best bet fighting this beast is to stand near it, wait for it to pounce, then strike it while it's down!

(Interestingly if you look at its back foot, it looks like I erased some pixels of the sprite without noticing all this time... This is probably still in the latest version.)


For those that want to see fights against all of these enemies, here's a video I recorded.

All right, time for the really technical things that literally can't be gotten to in-game. These are mainly just sounds, but these sounds alone give a big impression that I really didn't know what I wanted from World of Kirbycraft back then, as if the whole game didn't give that away with its generic grassland level...

Inside wok_x.pk3's sound folder, a bunch of unused voice samples and "music" can be found. In the voices/Monsters subdirectory, enemy and player sounds are stored, but take a look at that directory's contents. See those WOKGUY sounds? Those were intended for common enemies that didn't deserve custom sets of voice samples. The tiger uses the last set, but every sample above that isn't used!
The other subdirectories are arguably stranger, so here's another list:
This video plays most of these unused sounds, minus the "weird" ones, since those are barely audible without editing. Since I forgot to include it in the first post, Mary's voice acting is included here as well, specifically the lines that never got used or were removed in later versions due to the removal of beams and cup-based weapons. Apologies for how long it took to finish this post, which was supposed to be done months ago!