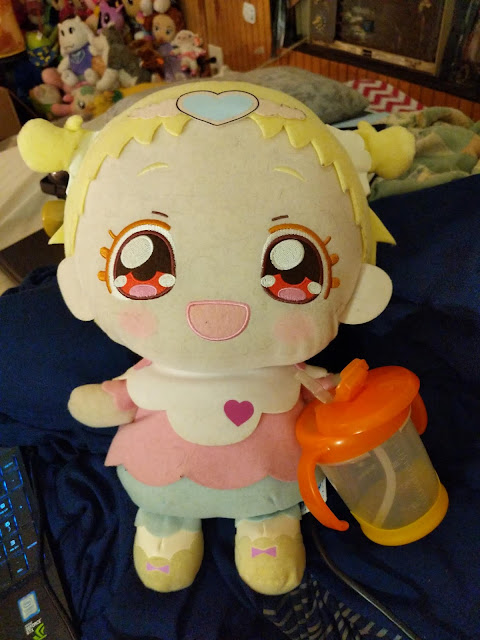 Welcome back to Fiction in Reality, the series of blog posts where I look at something from another universe and show how it was brought into reality! In this post, we'll look at a strange cup that I found when looking at Hugtto! Pretty Cure!

I like Pretty Cure; It has many cute girls, weapons, and sometimes even mascot fairies! However, I don't do what Toei Animation intends, to watch the anime itself. Instead, I go straight for the merch, such as weapon toys and plush dolls. If any fairy mascot actually looks cute (and not weird) or if a cool wand is introduced, I'll buy the merch for it.

Despite this, I still like to peek at the anime. On the Pretty Cure Livejournal, a post where people discuss the latest episode is made each week, and these posts usually link to a Japanese image-board (that basically looks like 4chan and the like). There, screenshots are posted live as the episode airs and Japanese people comment on what's going on, usually joking around about advertisements and illogical behavior.

One day last year, I was looking at one of these "forum threads" for episode 10 of Hugtto! Pretty Cure. I don't care about the plot in Pretty Cure enough to bother looking up what really happens in this episode, but it looks like the Pretty Cures, Harry, and Hug-tan go to some festival, where the blonde girl with the strange foreign Pretty Cure name is a waitress or something. After a couple scenes, including one where Hug-tan is making a weird face near an octopus, it changes scenes to Harry and Hug-tan sitting down at a table.

Someone brings food to their table. Seems normal, right? Well, I noticed an odd small pink cup with a straw on the right side of that tray. When I saw that, all I could wonder was what the cup was; It looked cute and unique, like nothing I've seen in America. However, what happened next made me more interested, thanks to my straw obsession...

Suddenly, the camera hard-cutted to Hug-tan, drinking out of said cup, using the straw.... Seeing this fulfilled my obsession, leaving me feeling very interested in what she was using, and other weird things like if she was biting the straw at all... Yes, I'm that weird, sorry.

After seeing this, I went to the Pretty Cure subreddit and asked about this cup. Alisterchadwick replied, saying these things were "baby mugs". I looked it up, and to my surprise, I found one that looked nearly just like it, but was orange instead of pink. More recently, I found a pink version of it on Yahoo! Japan Auctions, but I didn't get it when the carry-bag it was bundled with was shipped to me. Due to that plan failing, I resorted to just buying an orange version.

Since the baby mug arrived recently, let's look at it! 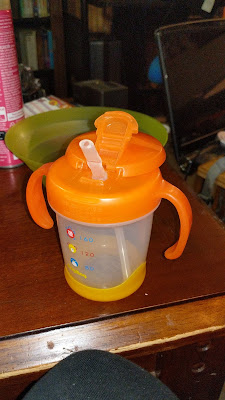 The only baby mug I could find that appeared to be what they used as reference was Pigeon's MagMag Straw baby mug. It has the handles on the sides, the bottom part that goes upward under the handles, the off-center lid, and the flap on top! It looks weird and random in the anime, but the flap makes sense when you see the baby mug in person, as it's what holds the straw down when it's not in use.

Due to how this baby mug only appears in two shots in the anime, there's not much to compare it to other than the Hug-tan drinking GIF above. Therefore, let's see a back shot and compare it to its anime appearance!
Even on the side others would've seen as Hug-tan drank the juice inside, things still look consistent with the real baby mug, including the flap (if I took the picture at the same angle) and off-center lid! I wish they bothered with transparency instead of faking it, when I know they must be using computers, which support transparency when drawing! I guess anime rarely changes its dated method for transparent objects. To give the artist credit, the color they chose is somewhat close to the color the transparent plastic(?) becomes when on a dark background, as shown in the picture above.

An interesting thing to point out is the straw's appearance in the anime. It isn't drawn transparent, of course, but it looks like they drew it like a white straw, shaded a bit to represent the juice passing through it, like a real white straw would do. It's an odd workaround but it's a perfectly-fine one for the very few scenes this cute thing appears in. If I was in charge of this anime or any animated series, oh, you know I'd have characters drinking from straws a lot more than the average cartoon or anime... In fact, if animation wasn't so expensive, I'd already be commissioning animation of Mary drinking from cups...but that'll never happen. Anyone want to do that, by the way? 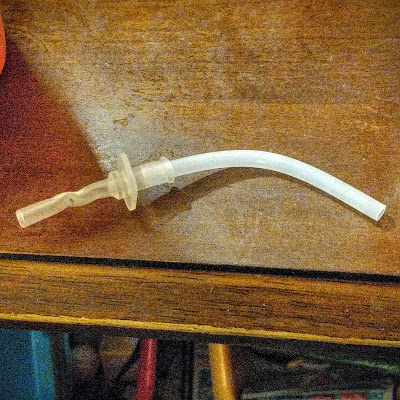 Anyways, I digress. My wishes for an animator to give me professional drinking animations aside, there isn't much to say about this cute baby mug, unlike the melodica. Back to the straw, it's interesting how Pigeon's baby mug training straws are put together; Each straw comes in two pieces, a long, bendy piece and a shorter part that is inserted from under the lid. To keep babies from removing the straw, a flat part fits under the hole. Additionally, even if a baby got inside the baby mug, it requires a lot of force to remove it.

Something I didn't expect before I got the baby mug today was that the top piece has a squishy outer layer that feels like the same material used for nipples on baby bottles! It's weird-feeling when I put this straw in my mouth, since I'm used to restaurant cup straws that don't have this extra layer. Overall, it's an interesting mix between a straw and nipple, perfect for babies transitioning over to cups.
To finish this post off, here's a video showing the cool process for opening old MagMag baby mugs's lids. First, slide the lid away from the flap using the slight slope at the middle of the lid. Once it's slid all the way back, the flap can be opened, revealing the straw under it!

Anyways, next time, I suppose it'll be time to show off something not from an anime for once, something that is to be removed from my game soon enough...
Written at 3:00 PM