The frustrations of forced e-mail subscriptions

It's time for a rant! Well, sorta, as there isn't much to say about this problem, but it's something that needs to be improved! Hopefully, you already have the general idea in mind, but I'll talk about it anyways. Unfortunately, I've written this after I've unsubscribed from some of the newsletters, so there will only be one picture.

Y'know websites like EFF and DemandProgress? Well, you may see petitions on there to sign, and it seems easy enough! That is, until you see the first part of the problem, that you have to enter your information. Sure, that may help with indicating what part of the United States you're within, for when the government hopefully sees them, and that's fine, but look closer, near the "sign" button...

Yep, there's a small disclaimer saying that by signing, you agree to receive e-mails from us and other websites! Seems like it'll be fine, so you sign the petition, success! ...you may regret doing that in the upcoming days, as that disclaimer forcibly signed you up to a lot of newsletters! These are usually e-mails asking for donations or to sign another petition, but these, while helpful to letting you know the current problems within America, cause a feedback loop, which I'll get back to in a second.

These e-mails can pile up in your inbox quickly, because they vary based on how many problems are occurring. If there's more of them, get ready for multiple newsletters right after eachother, from the various places they've subscribed your e-mail address to! As required by law (which I hate how they force things on newsletters), there is a unsubscribe link in the footer, but then two other problems appear!
So, how many newsletters are you signed up to? Well, let this mobile screenshot do the talking: 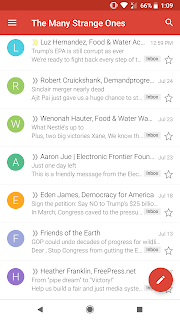 Two of them look near-identical, but they are "Food & Water Action" and "Food & Water Watch", seemingly two different newsletters! There were more than this, but these were the ones I found in my inbox and trash today.

Now, back to that feedback-loop; You've unsubscribed from one newsletter, but then you see a petition that grabs you; You really want to sign it... Ah, but remember that little disclaimer; If you do that, you'll have to start the cycle anew! It's very stupid they do this, let me just say; I'd like to sign petitions, but without being forcibly subscribed to newsletters due to this unrelated event! Unfortunately, until they ever do that, I'm outta here!

EDIT (8/18/2018): Even after all of this, I'm still getting one subscription I swear I didn't have before, CREDO.
Nice job literally ban-evading, guys! I thought I unsubscribed from every single newsletter, but you still had me on one list! Time to show the easy (forced by stupid law) unsubscription process!

Scroll to the bottom of any of their e-mails and you'll find an unsubscribe link. After choosing that, just hit the unsubscribe button. That was simple, but clearly it isn't simple to these people to realize people don't want a bunch of e-mail subscriptions just because they chose to sign a single petition!
Written at 3:00 PM